So today we heard that the review of our Catch A Fire show was the ‘MOST READ’ on the London Jazz Blog! Nice one people!

And now we have an excellent preview by Jon Turney of the forthcoming performance on 17 November of the Nu Civilisation Orchestra‘s outstanding concert, Parallel: A Tribute To Joe Harriott – Where Music Meets Art at the Purcell Room, SouthbankCentre, London – home of Tomorrow’s Warriors and the Nu Civilisation Orchestra. We’ll also be displaying the art of the wonderful artist, Emma Godebska as part of the show.

Turney describes this concert as ‘well worth the effort’ and ‘exactly the kind of thing jazz festivals are about’. See excerpts from the concert in Bristol here.

Zeitgeist moves in mysterious ways. Science sees more simultaneous discoveries than can be easily explained. Music, too, finds players striving for similar goals even though they haven’t discussed them.

The titles of the coruscating Jamaican alto saxophonist Joe Harriott’s key recordings, Free Form (1960) and Abstract (1962) declared his determination to get beyond be-bop to something freer from ready-made structure. Read on…

Some footage of the Nu Civilisation Orchestra’s gig at St George’s, Bristol on 10 October as part of the Lively Up! Festival. If ever you thought you were scared of ‘free form’ jazz, this set should allay your fears as it provides an completely accessible entry point to this area of jazz. As MD Peter Edwards mentioned at the Nottingham show a couple of weeks earlier, Joe Harriott created some truly beautiful and sublime music that merits investigation. And he’s right. It’s not scary!

About the show, Peter says:

“My newly commissioned arrangements feature music from Joe Harriott’s groundbreaking albumsFree Form (1961) and Abstract (1963). The performance also includes the work of visual artist Emma Godebska who has produced a wonderful series of paintings based on the band’s interpretation of Harriott’s music. Projected on a screen are Emma’s works in various stages of development whilst the band creates its own sonic improvised art pieces, making the show a truly multi-dimensional experience.”

Go see it! It’s on tomorrow (20 Oct) at RNCM Theatre in Manchester, and at the Purcell Room at Queen Elizabeth Hall, London on 17 November.

Lovely review by Jon Turney on the Mainly Jazz in Bristol blog of our Nu Civilisation Orchestra concert on 10 October at St George’s Hall, Bristol (what a beautiful venue). 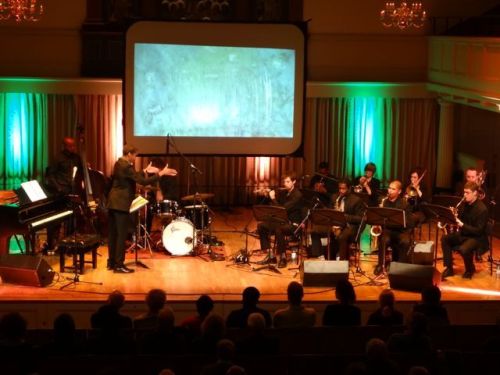 Joe Harriott died (way too young) just under 40 years ago, and since then has mainly existed in that jazz limbo of semi-legendary figures who did remarkable things but were not truly appreciated in their lifetime, nor much listened to afterwards. This Nu Civilisation Orchestra (NCO) project ought to change that.

Harriott is best remembered for a more or less simultaneous discovery of the possibilities of breaking out of set harmonic frameworks often described as akin to what Ornette Coleman’s early quartets were opening ears to around the same time. His two recordings in this vein – Free Form and Abstract – are the inspiration for a suite of pieces from the orchestra. NCO is one of the many projects inspired by the admirable Gary Crosby, and is led by pianist, arranger and composer Peter Edwards. He’s studied Harriott’s stuff, and scaled it up from the original quintet presentation (sax, trumpet and rhythm section) to an 11-piece orchestra.

It works brilliantly, I think, partly because Harriott’s originals – despite the forbidding titles – are accessible, full of melody, but also come with intriguing twists and turns which lend themselves well to orchestral elaboration. As Brian Morton and Richard Cooke say in the Penguin Guide to Jazz on CD, “by later standards, Harriott’s experiments seem cautious”. He was never really an outside player, in the sense current in the mid-60s avant-garde. From this distance, his pieces sound like someone extremely talented taking trouble to avoid hard bop cliches while still incorporating plenty of blues, along with elements from his native Jamaica.

That all seems a very natural blend now, but worthwhile cultural production is never natural – it has to be worked at. And the writing, arranging and rehearsing here must have been an immense amount of work. We heard a 90 minute set, after a warm-up featuring the rough-and-ready charm of the Bristol Reggae Orchestra, and it placed some demands on the concentration toward the end as the music was so consistently rich and rewarding. (Video backdrop of some Jackson-Pollock style action painting was a distraction, mainly – too obvious a link with “free-form”, perhaps?)

The musical rewards came partly from the skill in orchestration, and from the new pieces Edwards has written to sit alongside Harriott’s compositions, partly from the fine playing. Byron Wallen and Nathaniel Facey stood out, as you’d expect, along with the leader. Will Gibson on flute and clarinet also shone, but the entire band nailed the (lengthy) book of complex arrangements and made them sing.

All in all, the only worthwhile kind of jazz tribute: not retread, reinvention.

The Harriott set is just one of the goodies on offer as part of the Lively Up! Festival celebrating Jamaican independence 50 years ago. It is being presented again at RNCM in Manchester on Oct 20th, and during the London Jazz Festival on Nov 17th.

See this and other articles at the Mainly Jazz in Bristol 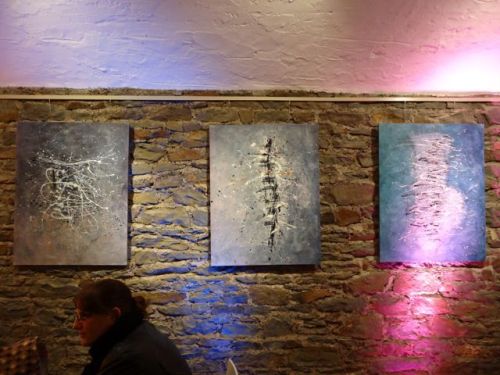 A NIGHT OF JAMAICAN JAZZ

A Radio 3 jazz presenter Geoffrey Smith wrote in the magazine last year that ‘Maybe 2012 will be Joe Harriott’s year’ – following the timely release of a CD box set, celebrating the career of this often overlooked, but extremely gifted, saxophone player from Kingston, Jamaica, who settled in Britain in the 1950s and died in 1973. Harriott’s diverse career took in established jazz forms, writing for the likes of trombonist Chris Barber, [Spotify link] to his own ‘free form’ jazz experiments and the later ‘Indo-Jazz’ crossover LPs with John Mayer. It’s tragic that he died so young, aged just 44.

And the interest is growing. Joe Harriott’s music is currently being showcased in concerts across the country, as part of the Lively UP! Festival, which marks 50 years since Jamaican independence.

I went along to the Bristol leg of the celebrations, hosted by St George’s earlier this week. The first half, delivered by The Bristol Reggae Orchestra, a (going on) 30-piece band with strings, brass, woodwind and a pulsing rhythm section, definitely set the scene. The band drifted through tunes ranging from Nat King Cole to reggae hits by Freddie MacGregor and Delroy Wilson. And this feel-good community band had people dancing and swaying in the aisles of this converted church.

By way of contrast, the second half showcased two of Joe Harriott’s ‘free form’ jazz albums from the early 1960s, ‘Free Form’ and ‘Abstract’, which had been expertly re-arranged by pianist Peter Edwards – from the original five-piece to an 11-piece line-up. The band, the Nu Civilisation Orchestra has some excellent UK jazz talent, including trumpeter Byron Wallen and alto saxist Nathaniel Facey in its ranks. And introducing the programme, Edwards explained how Harriott saw the sounds of ‘free form’ jazz as ‘equivalent to brush strokes on a painting’. To illustrate this, a screen behind the band showed film footage of visual artist Emma Godebska, creating paintings, while it played.

The result was fascinating and genuinely illuminating, as we were treated to the challenging soundscape of Harriott’s ‘free form’ jazz. And this was no safe option for some of the audience. The arrangements moved from tumbling bebop, plunging into shuddering grooves and at times squawking cacophony, interspaced with calypso, blues, swing and myriad influences – with all concerned demonstrating why they are at the top of their field.

At the start of the concert, Lively UP!’s executive director Janine Irons, announced: ‘We’re going to be celebrating the great Joe Harriott – a great musician that a lot of people don’t really know about.’ I certainly learnt a lot about Harriott’s ‘free form’ jazz and I hope that this project triggers future performances of his wider output and re-releases of some of his great records, such as the incredibly rare Hum Dono (1969).

There’s another chance to catch A Tribute to Joe Harriott in Manchester at the RNCM Theatre on Saturday 20 October.